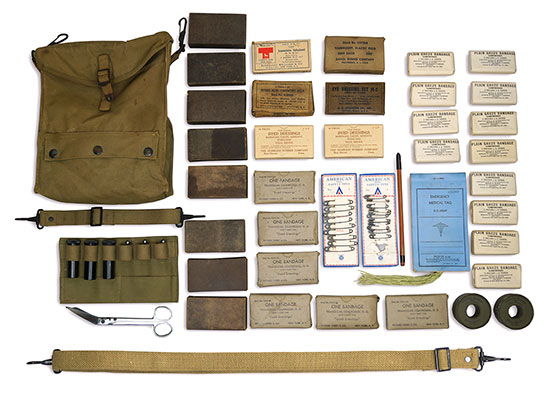 The above kit was already supplied to Military Police personnel before the end of WW2, but more details are not available, according to the listed contents, it seems that either a single std. Canvas Pouch (as already previously illustrated) was probably necessary i.e. Item No. 9708500, but there’s no proof of this – it could also have been the later version, i.e. Item No. 9708505 (with press studs instead of laces).
Although not yet listed in the 1 March 1944 Medical Supply Catalog, the Pouch is mentioned in the Army-Navy Catalog of Medical Material (Sets, Kits, Outfits) dated 1 July 1947 and the Armed Services Catalog of Medical Materiel dated 1 July 1949. Its official designation then reads Case, Medical Field Kit, M-2, Item No. 9-130-025 (with Lace) or No. 9-130-150 (w/o Lace).

Kit contents underwent similar minor modifications as the other First-Aid Kits, as can be derived from the above listing. The number of Vials was reduced to 3 only. Both Burn Injury and Eye Dressing Sets were improved versions. White bandage and dressing material was replaced by less conspicuous Field Brown. The Emergency Medical Tag could have either been the early type, designated Form 52b, or the later one designated Form 8-26.

This page was printed from the WW2 US Medical Research Centre on 8th February 2023 at 14:44.
Read more: https://www.med-dept.com/articles/kits-of-military-police-personnel/