First isolated in 1804 by German pharmacist Friedrich W. A. Sertürner (1783-1841), Morphine was soon globally recognized for its strong pain killing aptitude. Its first use by an Army was during the American Civil War, in which approximately 400,000 troops were reported as suffering from morphine addiction.

Sooner or later pain occurs following all wounds. It can be so slight, that it does not bother the injured person enough to require any particular attention, but if pain is severe it must be relieved! Only when it is severe, or when a severely wounded or injured person must be moved quickly (as from a wrecked vehicle or aircraft) it is wise to give Morphine at once. It may not always relieve the pain entirely, but will certainly lessen shock. Morphine Syrettes were to be found in certain First-Aid kits and Medical Packets and in Battalion Aid Stations, and at times were issued to some medical soldiers. Morphine was the most potent of all the drugs derived from Opium, it was a powerful depressor of the central nervous system, and produced a selective action on both respiration and pain sensation! For this reason and because of its depressant action on the respiratory center, it was also one of the most dangerous drugs.

During WW1, the necessity for a strong pain-killing drug was soon unearthed, and Morphine was issued to medical personnel, along with a hypodermic syringe. This was often administered on the frontline and in Dressing Stations further behind the lines. Exact figures for Morphine addiction during WW1 are not known, although it is expected that this number would have been very similar to that of the American Civil War. Introduction:
During the inter-war period, a drug and narcotic company located in Brooklyn, New York, N.Y; E.R. Squibb & Sons (Edward R. Squibb, graduated as an M.D. in 1845) began development of a self-contained injector for the administration of  Morphine. The patent for Squibb’s developed “Hypodermic Unit” was filed on 15 April 1939. Soon after the patent for the Syrette had been approved in October of the following year (US Patent No. 2,219,301), the Army adopted the design as a frontline method for the administration of Morphine to combat casualties. Original illustration as taken from the US Patent filed by William Erhard (assignor to E. R. Squibb & Sons) on 15 April 1939.

The Syrette itself was designed to be expendable, i.e. a one use item unlike the earlier, more primitive methods of administration, by which a glass or metal hypodermic syringe had to be configured. It was manufactured of a hermetically sealed, collapsible metal body, containing ordinarily ½ Grain of  Morphine Tartrate. Into this metal body was secured a hypodermic needle, into which was inserted a metal wire loop, designed to pierce the inner seal of the tube to allow the medication to flow. Once the seal on the tube had been pierced, the needle could then be injected into the patient (at least half its length), and the medication administered by slowly squeezing the collapsible tube. The tube’s needle was protected by a transparent head which was to be removed prior to using the Syrette. 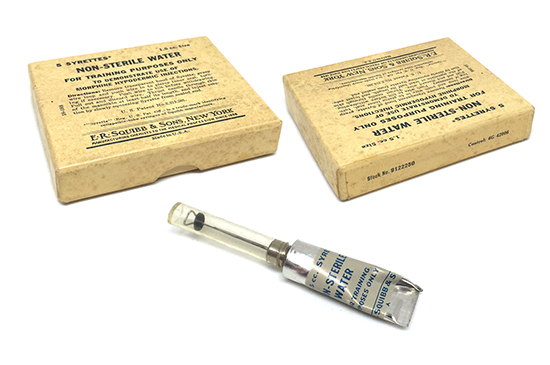 An illustration showing the non-sterile water 5-pack of Syrettes (Item No. 9122250), as used for the training of medical personnel in the administration of Morphine Tartrate using the Syrette.

Caution:
Recommendations for injection are to use that part of the body which can be most quickly and easily exposed, such as the loose skin of the abdomen, the thigh, or the upper arm, and to prepare the skin with iodine or alcohol.
The full effects of Morphine are not felt for 20 – 30 minutes after injection, depending upon how the medication was administered. A second injection for continued severe pain should not be given within 2 hours after the first. Never give a second dose of Morphine to a person whose rate of breathing is 12 or less per minute, and never give Morphine unless there is severe pain. Shock or hemorrhage may so weaken the circulation that Morphine injected under the skin will not be absorbed, thus pain will not be relieved.  With blood volume restored by circulation, injection of Morphine is absorbed and the body feels its full effect. If there is danger of non-absorption, or in order to achieve quicker effects, it is best to inject the Morphine into a warm area such as the skin of the chest under the armpit. If the pain is quite severe, a Medical Officer may give a small dose of Morphine intravenously. Stress and disorganization of battlefield conditions often meant that the Syrette was injected intradermically (i.e. into one of the layers of skin), prolonging the period between administration and effect. Period photograph demonstrating the method of administration of Morphine Tartrate into the patient.

The latter of these contraindications is perhaps the most important during a combat situation.  Indeed some sources have even quoted (namely TM 8-230) that:

During the past war [World War II] it was sometimes necessary to delay surgery for several hours while a casualty recovered from a heavy dose of Morphine given just before he arrived at the Hospital.

It should be noted that aidmen could easily overdose casualties, especially in cold weather, when slow blood circulation delayed absorption of the initial shot and the patient received more Morphine at an Aid or Collecting Station! To guard against such mistakes, frontline medics who did not fill out EMTs often attached the used Morphine Syrette to the soldiers’ clothing before evacuating him.

Supply to the Army: 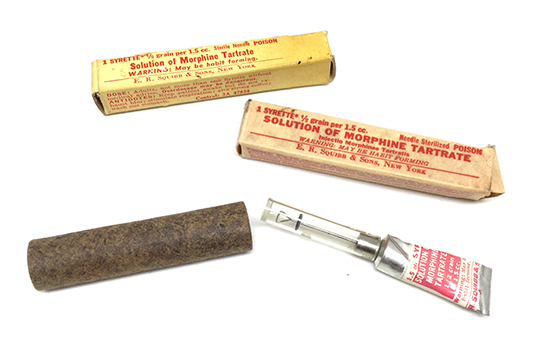 Illustration showing Item No. 9775700; Morphine Tartrate, 1 Tube, with different designs of outer box. The hard fibreboard tube was used to protect the Syrette in certain types of First-Aid Kits (notably the Parachute First-Aid Packet – Item No. 9778500).

Squibb produced a number of packages of their Morphine Syrette. The most popular of these was without a doubt Item No. 9115700 – Morphine Tartrate, 1 Tube. This was the individual tube of Morphine which could be found inside every Parachutist’s First-Aid Packet. This unit consisted of a small, light yellow and red printed box, inside which was contained the Syrette itself, i.e. a collapsible tube with a sterile needle. Item No. 9115500; Morphine Tartrate, 5 Tubes is shown above. The blue label which can be seen is a 1¢US Government Narcotic label.

Another major package of the Morphine Syrette was the 5-Tube variety (officially designated Item No. 9115500 – Morphine Tartrate, 5 Tubes), which was issued widely to medical personnel, primarily NCOs and Officers. The box consisted of a light yellow-colored rectangular cardboard container, with red printed text. Inside, was a divider, used to prevent the tubes from colliding with one another inside the box. Item No. 9115500; Morphine Tartrate, 5 Tubes is shown above. The version shown above is the Navy version of the standard 5 Tube Army-supplied package. The item shown above has a white label in place of the Government Narcotic label which reads:
Produced by E. R. Squibb & Sons for U. S. Navy. Morphine used was property of the U.S. Government.

Other packaging examples of Syrettes as prepared for the Army can also be found, and a collection are shown in the illustrations below:

Illustration showing the 6-pack variety of the Morphine Syrette, as supplied in medical kits. Once again the Government Narcotic label is clearly visible, this example being from 1942. Illustration showing the combined Morphine Syrette and Iodine Applicator box. This was another item that was common in medical kits. Another manufacturer was Conray Products Co.

This page was printed from the WW2 US Medical Research Centre on 4th July 2022 at 06:53.
Read more: https://www.med-dept.com/medical-kits-contents/class-9-items-drugs-chemicals-and-biological-stains-morphine-tartrate/